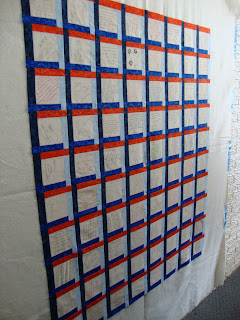 I’ll admit that there were times when I thought I’d never get around to sewing together the top to my signature quilt, but it is officially pieced together.

I still have to add two borders, but that’s a piece of cake at this point. I’ve even gotten a little ahead of myself and started marking a quilting pattern on the top. I’m just going to quilt in the blue and orange sashing around the signatures, because I don’t want to take away from the messages our friends and family wrote us on our wedding day. 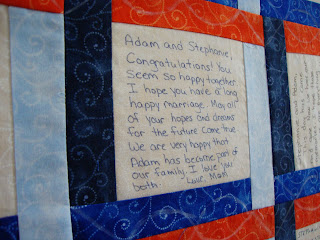 I’m really glad I made these blocks instead of just having a guest book. In addition to well wishes, we also received lots of marital advice. And my aunt, also a quilter, even put our monogram on one block. The monogram is a big joke by the way as Adam, Soebbing, Stephanie, spells out ASS. There will never be monogrammed towels in our bathroom.

One of my family members that signed the quilt has passed away in the six months since the wedding, so I have a feeling that as my relatives get older, this quilt will be cherished.

I’m going to quilt it by hand using the big stitch method. I got blue and white variegated thread, so that should look nice as it weaves through three different colors of blue and orange. Now I just have a little less than six months to finish it before our one-year anniversary.

Things to do before Quilt Retreat